Changed by Dr Henry Knipe on 22 Sep 08:16
Back to revision history

Endometriomas, also known as a chocolate cysts or endeometriotic cysts, are a localised form of endometriosis and are usually within the ovary.

It affects women of reproductive age.

Endometriomas contains dark degenerated blood products following repeated cyclical haemorrhage. The cysts may be up to 20 cm in size although they are usually smaller (2-5cm).

Not usually helpful in diagnosis. ~10% of endometriomas can calcify.

In the typical situation there is acoustic enhancement with diffuse homogenous low-level internal echoes as a result of the haemorrhagic debris. This appearance occurs in 95% of cases and is considered the classic finding on ultrasound examination. Features of multi-locularity and hyper-echoic wall foci may be present. Anechoic cysts may occur, but they are rare.

Signal characteristics vary according to the age of any complicating haemorrhage 6:

A shading sign3 may be seen and is very suggestive of an endometrioma.

If not surgically excised, follow-up should be at least yearly 4. GnRH agonists may be used for medical management. 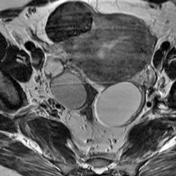