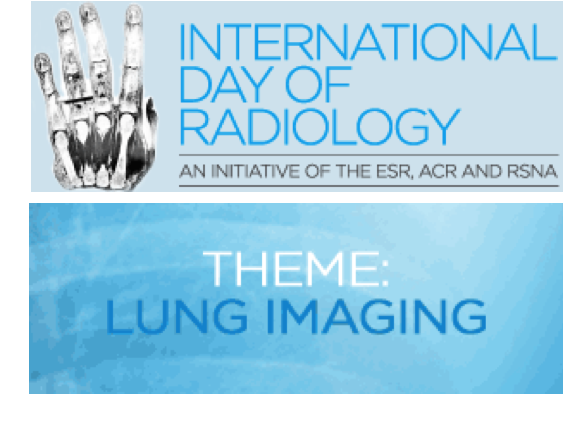 November 8 is the International Day of Radiology, an event which aims to promote awareness of the amazing work done by Radiologists around the world.

The 2013 theme is Lung Imaging and so at Radiopaedia.org we have decided to celebrate with a chest x-ray quiz!

Here's what a Radiologist would've seen... 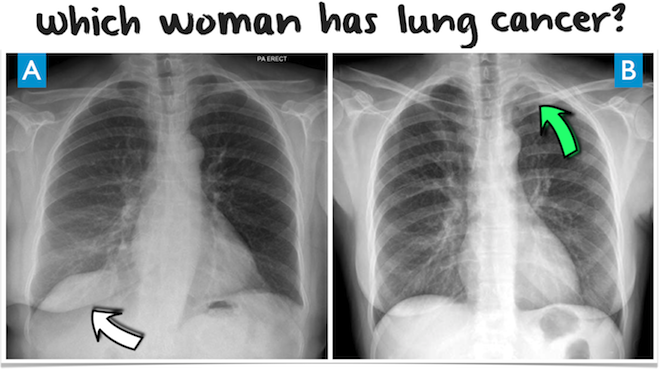 Woman B has a lung cancer hiding in the apical region often termed a Pancoast tumor (green arrow). These can be very difficult for the untrained eye to spot and this area is an important "check area" for radiologists when interpreting chest x-rays.

Woman A has a breast shadow on the right (white arrow) but does not have one on the left because she has had a mastectomy for breast cancer. Such asymmetric density can cause an inexperienced film reader to mistakenly diagnose a lung abnormality. 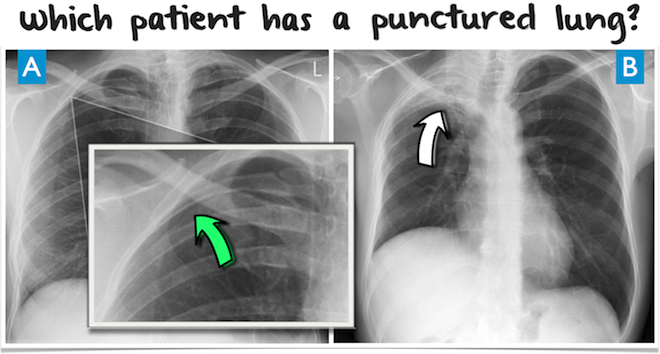 Patient A has a small punctured lung (aka pneumothorax) which can be a difficult but very important diagnosis to make. Air is seen outside the lung with a thin line representing the lung margin, known as the pleura, evident in the upper chest (green arrow).

Patient B has fibrosis in their right lung apex (white arrow) which has lead to a reduction in lung volume with elevation of the diaphragm on that side. This was a case of radiation induced fibrosis. 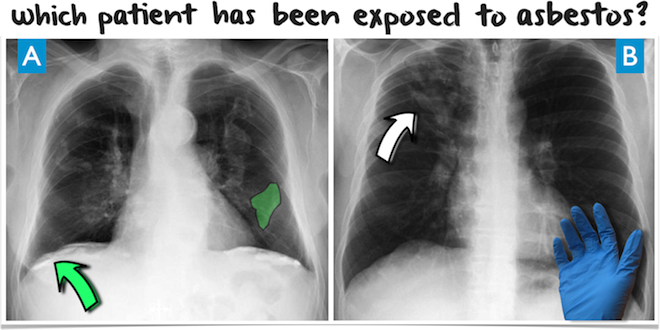 Patient A has multiple calcified pleural plaques on the surface of the lung which is a hallmark of asbestos exposure. These are classically described as being geographic, looking somewhat like continents on a world map (green shading). On the diaphragm they appear as thick white lines (green arrow).

Calcified pleural plaques are themselves benign and do not indicate asbestosis (pulmonary fibrosis due to asbestos) or mesothelioma although the patient would be at increased risk of developing these deadly conditions.

Patient B has a fungal infection within dilated bronchi in the right upper lobe of the lung (white arrow) known as allergic bronchopulmonary aspergillosis. This occurs most often in asthmatics and produces what is described as a 'finger in glove' appearance.