Juxtacortical may not mean what you think it means

I am constantly concerned by how often the term juxtacortical, in the context of multiple sclerosis, is misunderstood by clinicians, radiologists and radiology residents / registrars. This is particularly concerning as the imaging diagnosis is dependent on understanding this term. I recently added a short article (here) trying to get to the bottom of this definitional issue, but thought I would elaborate a little here.

The term juxtacortical is particularly important in the context of McDonald criteria, although oddly enough the term is not defined in either the original 2001 paper or the 2010 revision. Perhaps partly due to this, it is a term often misunderstood and thought to mean merely "sort of near the cortex".

This is not the case, but rather it refers to lesions which abut the cortex, and thus involve the subcortical u-fibers (also known as short association fibers and represents connections between adjacent gyri of the brain, located within the cortex or immediately deep to it in the very outer parts of the subcortical white matter). 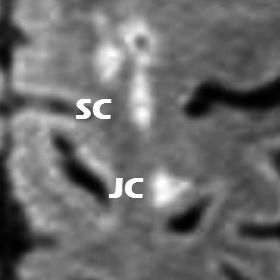 An alternative term to juxtacortical which is perhaps more easily understood is leukocortical (i.e. involving both cortex and juxtacortical white matter), especially as the importance of grey matter involvement in multiple sclerosis is growing, and is increasingly imaged using modern sequences (e.g. double inversion recovery) and higher field strength.