As part of a recent 5 part blog by Lincoln Berland MD titled You Don’t Need the Ultrasound Biopsy Guide!, we ran a survey to explore a few facets of use of guides. Specifically we sought to examine if use:

Before looking into these questions specifically, let's get an overview of respondents.

We received 307 responses, with the majority of individuals not using a guide (72% never/almost never). Respondents reported performing a variable number of procedures a month, roughly evenly split between 2-10, 20-30 and >30. Most (80%) had been performing these procedures for less than 10 years. Of the 307 responses, 280 provided country information (from 70 different countries). 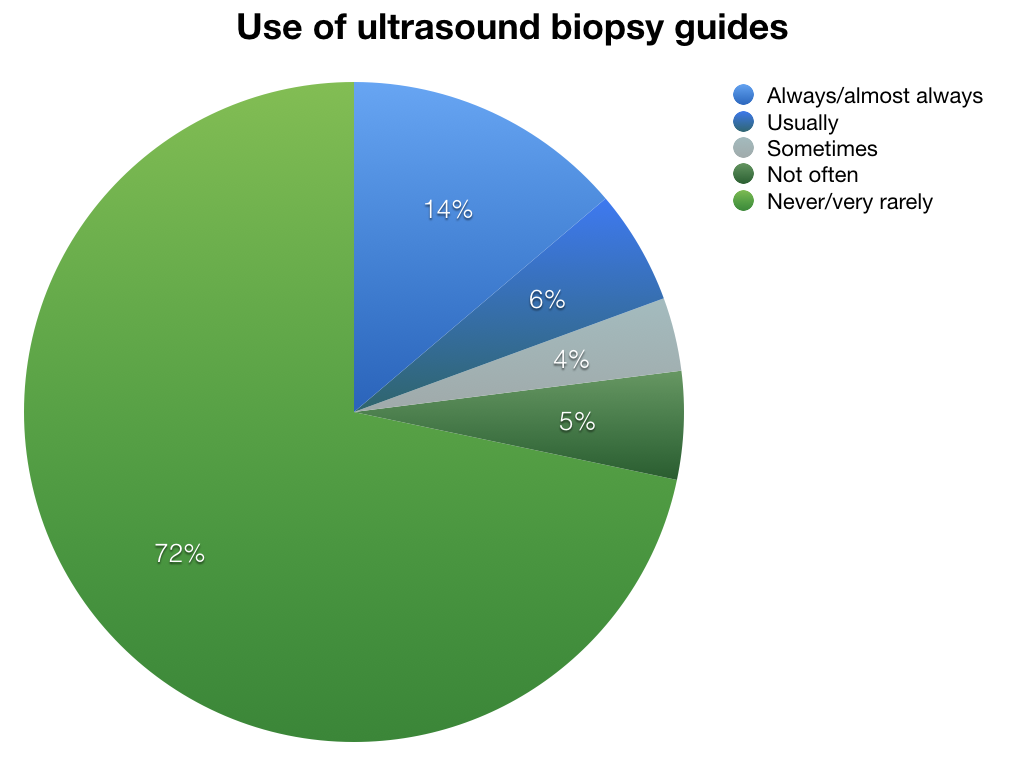 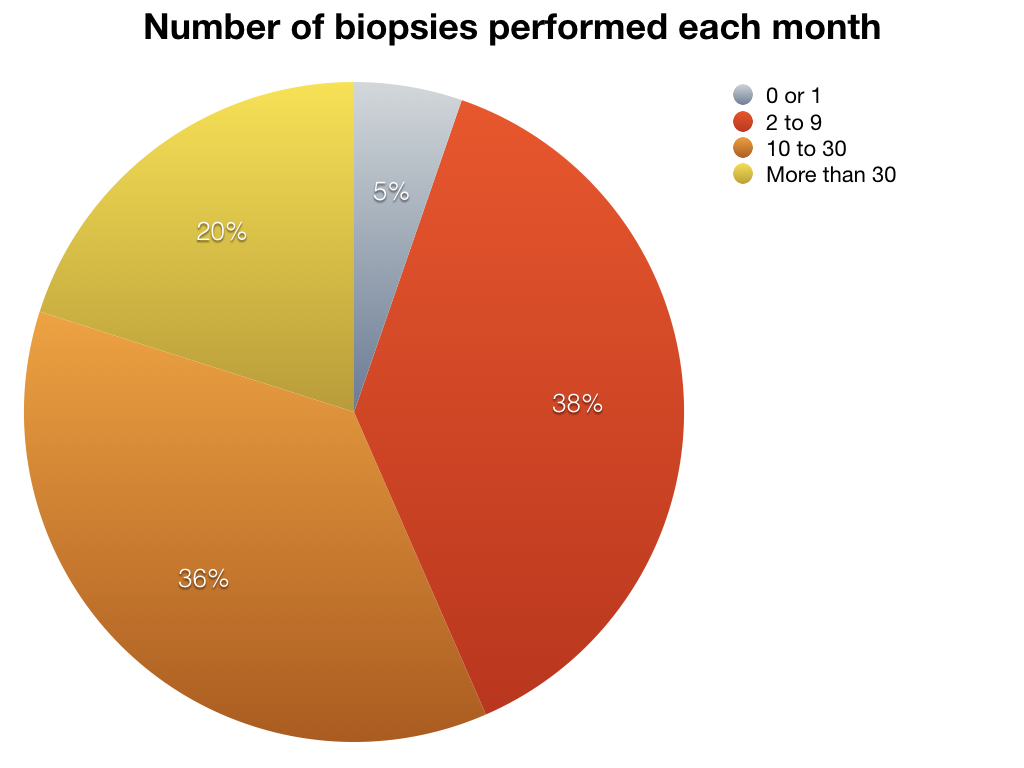 Does use depend on the country or region you live in?

The fact that generally guides are not used, and that in many countries only 1 response was received, makes it difficult to be specific. Grouped into regions however there does seem to be a trend for greatest use in Europe and the Middle East, with the average response being somewhere between "not often" to "sometimes". The Americas (both north and south) and Asia reported guides used on average "not often", whereas Africa and Oceania (Australia and New Zealand) reported "never / almost never" (see below). 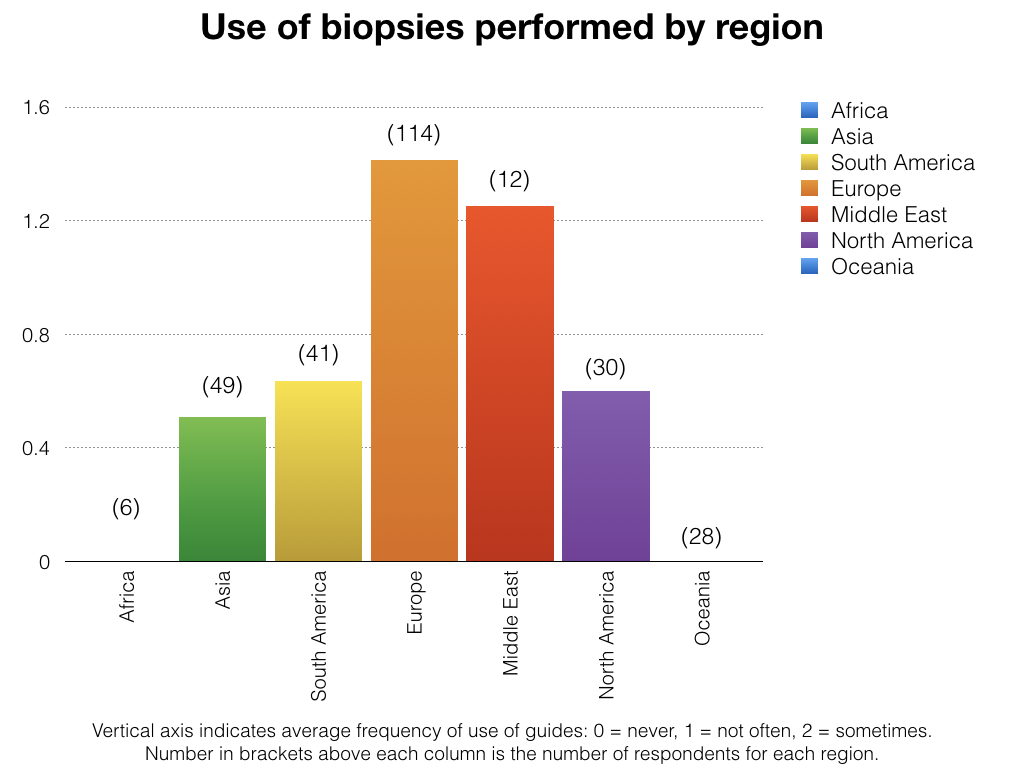 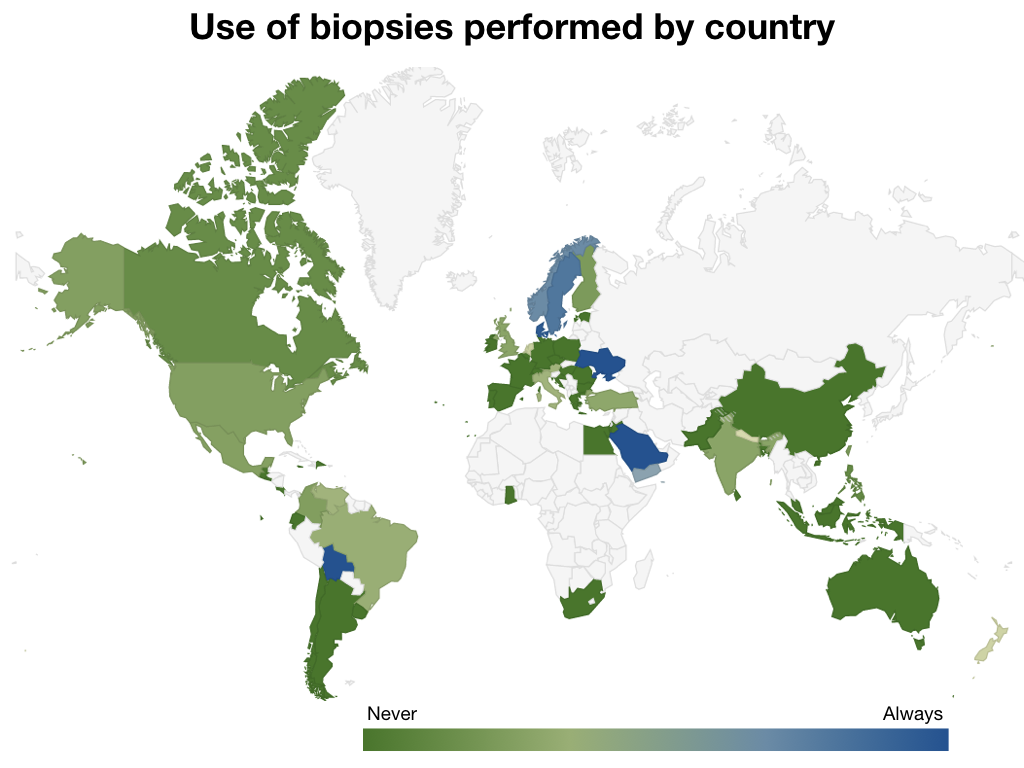 Does use depend on when you trained?

The data was very skewed towards relatively junior radiologists with the vast majority being under 20 years experience, and most with fewer than 10 years. As such although the highest use was in the most experienced respondents, the number of responses was too low to infer any actual trend.

Does use depend on how many biopsies you perform?

The strongest correlation seems to be with how often biopsies are performed. Radiologists performing on average more than 30 biopsies a month had the lowest average frequency of use (only 0.39; 0 = "never" and 1 = "rarely").

As a result of these relatively low numbers, anything other than simple descriptive statistics above are not really possible and statistical significance is unlikely to be met (even if one believed that the respondents were a truly random sample of radiologists across the globe, which clearly they are not).

Having said that, I think that one can safely state that the use of ultrasound guides is not the default and that many (almost certainly most) radiologists rarely if ever use guides. It also feels that there is likely a strong influence on the number of procedures performed, with more experienced radiologists finding that the guides are unnecessary and perhaps hinder.

Regional variation is probably more granular that we can assess, largely depending on what is the norm for the department in which you trained or are currently working.

Thanks again to Lincoln Berland for his thought provoking series on the topic.