Why 'eyeballing' ADC maps is a terrible idea

A little while ago I wrote about some of the reasons I thought it was important to measure actual ADC values, rather than just claiming there 'was' or 'wasn't' restricted diffusion. That article used epidermoid cysts to point out why such dichotomous terminology was unhelpful and in some situations confusing.  If you haven't read that post, then I suggest doing so now before we go on.

Reporting astrocytoma MRI scans is another really common situation in which talking about the 'presence' or 'absence' of restricted diffusion does not makes much sense. It is made even worse by the fact that trying to work if there is significant diffusion restriction (whatever that may mean) is visually very difficult.

Why is saying there 'is' or 'isn't' restricted diffusion silly? Well, we know that lower ADC values correlated fairly well with histological tumor grade; the higher cellularity, smaller extracellular space seen in high grade tumors leads to greater diffusion restriction. In diffuse astrocytomas, the following values have been reported 1:

Figure 1. Astrocytoma (GBM) involving the splenium, has a solid component with lower ADC values than the surrounding white matter, but also has a component of T2 shine-through. Working out how much restricted diffusion is present in the solid component is hard.  Complete case here.

So, despite some overlap, this is really quite useful right? Well it is if you bother to measure the values. What isn't useful is looking at the DWI and ADC maps and trying to eyeball the presence or absence of restricted diffusion. For some time I have tried to estimate ADC values of the solid component of a tumor by visually comparing it to normal white matter; I figured that if I could do this reliably then this would be good enough. Unfortunately, there are a number of challenges in accomplishing this visual task. Firstly on DWI there is invariably a component of T2 shine-through, so you are predisposed to interpreting lower signal on ADC as representing diffusion restriction. The second, and more substantial problem is the the presence of high signal (facilitated diffusion) surrounding the solid tumor. We (humans) are just not very good working out true shades of grey. 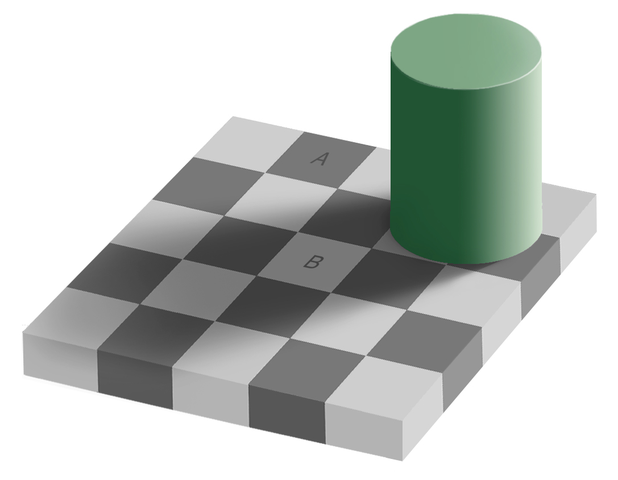 Figure 2. Square A and Square B are exactly the same shade of grey. "Grey square optical illusion" by Original by Edward H. Adelson, this file by Gustavb - File created by Adrian Pingstone, based on the original created by Edward H. Adelson. Licensed under Copyrighted free use via Wikimedia Commons (original file here)

In the famous checker shadow illusion (Figure 2), it is almost impossible to convince yourself that squares A and B are the same shade of grey (they are, really; read about it and see the proof in the relevant wikipedia article).

Similarly when looking at the solid darker component of a tumor on an ADC map, trying to work out if it is similar to white matter is just terribly hard.

So don't try. Get your handy ROI measurement tool and measure the ADC value. Not only does this take out the guess work, but it also is useful in a quantifiable assessment of tumor response to therapy; that is a topic for another day.