Why routine measurement of ADC values is important

Most of us know that intracranial epidermoid cysts demonstrate restricted diffusion, and we look for high signal on DWI to make the diagnosis. What I have repeatedly encountered, however, is confusion when the ADC maps are reviewed and the cyst content has signal similar to white matter, rather than being as black as an acute ischemic stroke. This leads many to start doubting the diagnosis, despite all imaging being characteristic. So in this quick post I will try and address the question "what do we mean when we say that epidermoid cysts demonstrate restricted diffusion", and to more generally address the use of the term "restricted diffusion".

The problem arises from the fact that we grow up being exposed to the concept of restricted diffusion in the context of ischemic stroke. We are used to saying "restricted diffusion is present consistent with an acute infarct". What we forget is that actually what we meaning is "this bit of brain restricts diffusion of water more than it should, were it to be normal". Because of this we think of diffusion restriction dichotomously (ie present or absent) rather than as a measure of a physical parameter, similar to say density on CT. So, when we say "epidermoids demonstrate restricted diffusion" what we mean is "compared to arachnoid cysts" which is usually their differential. The presence of a degree of restricted diffusion categorically tells you that this very high T2 signal lesion with low T1 and at least partial suppression on FLAIR does not contain CSF. In reality epidermoid cysts only moderately restrict, roughly similar to white matter. Most of the high DWI signal is due to T2 shine-through. 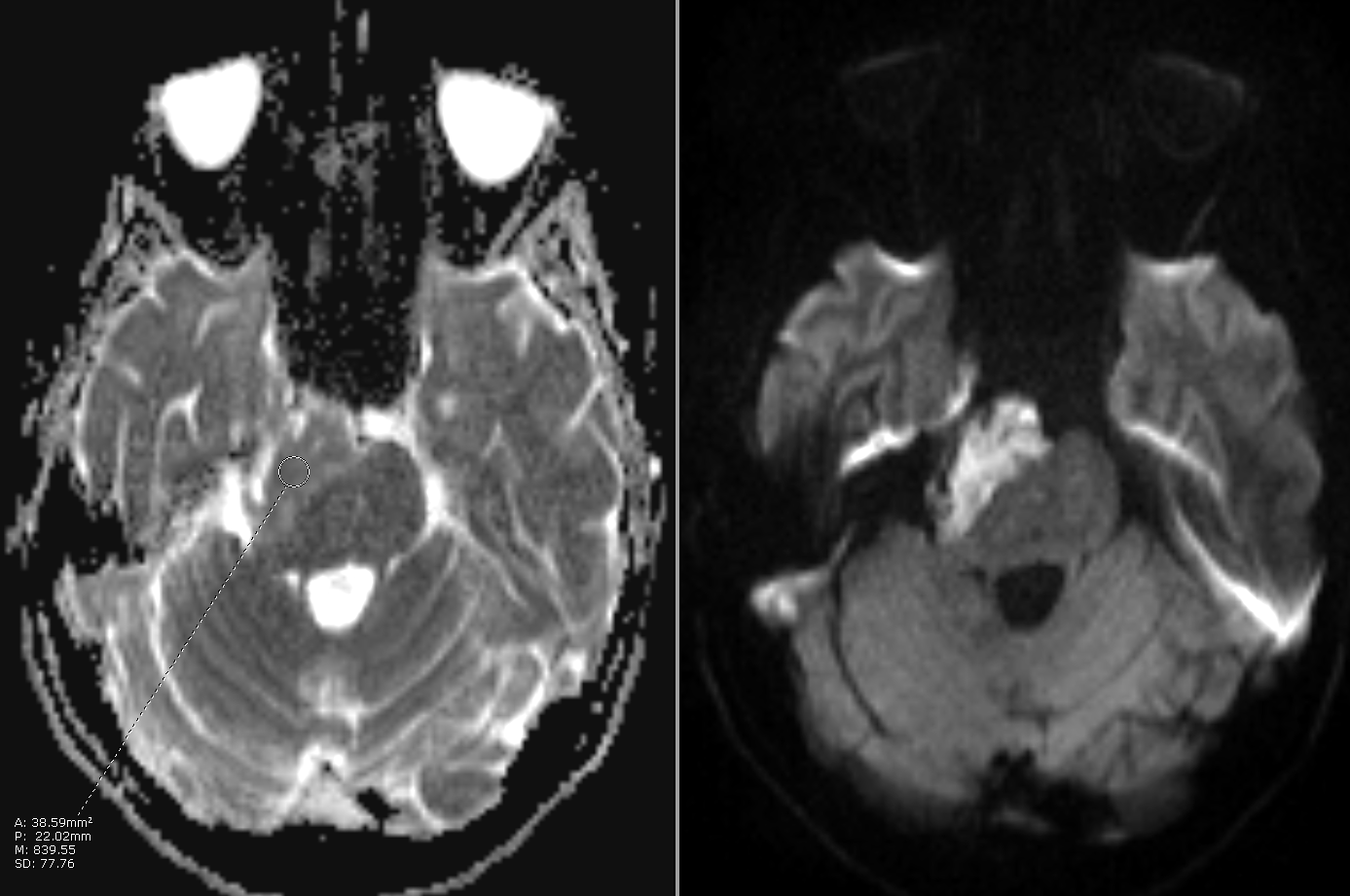 Become familiar with normal ADC values and routinely measure them and include them in reports.

I have been trying to encourage my registrars to become familiar with normal ADC values and routinely measure them and include them in reports. You should become as familiar with these values as you are with CT Hounsfield units (HU). So below are a few typical values (see ADC article for references; all values in x 10-6 mm2/s) followed by case examples: 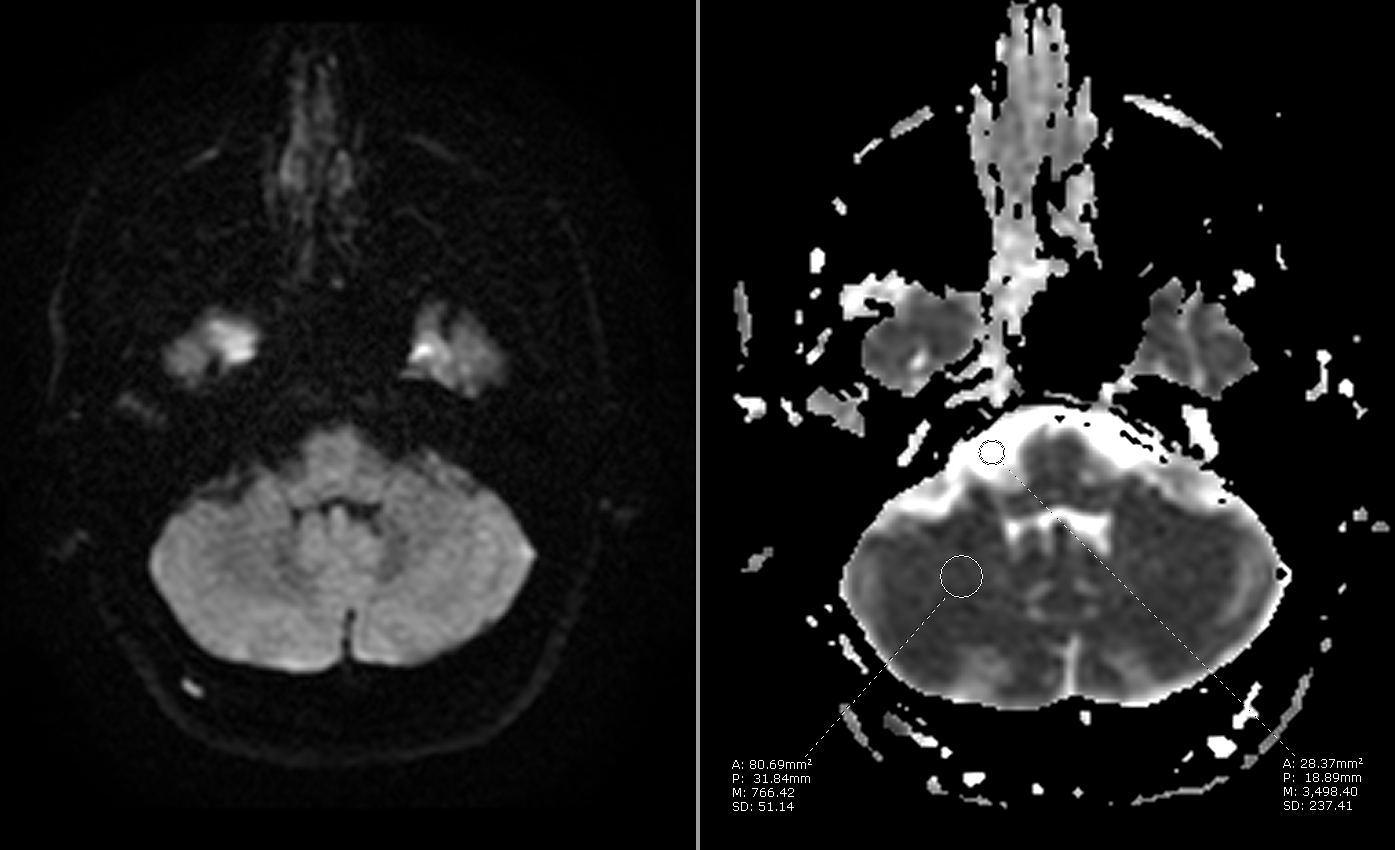 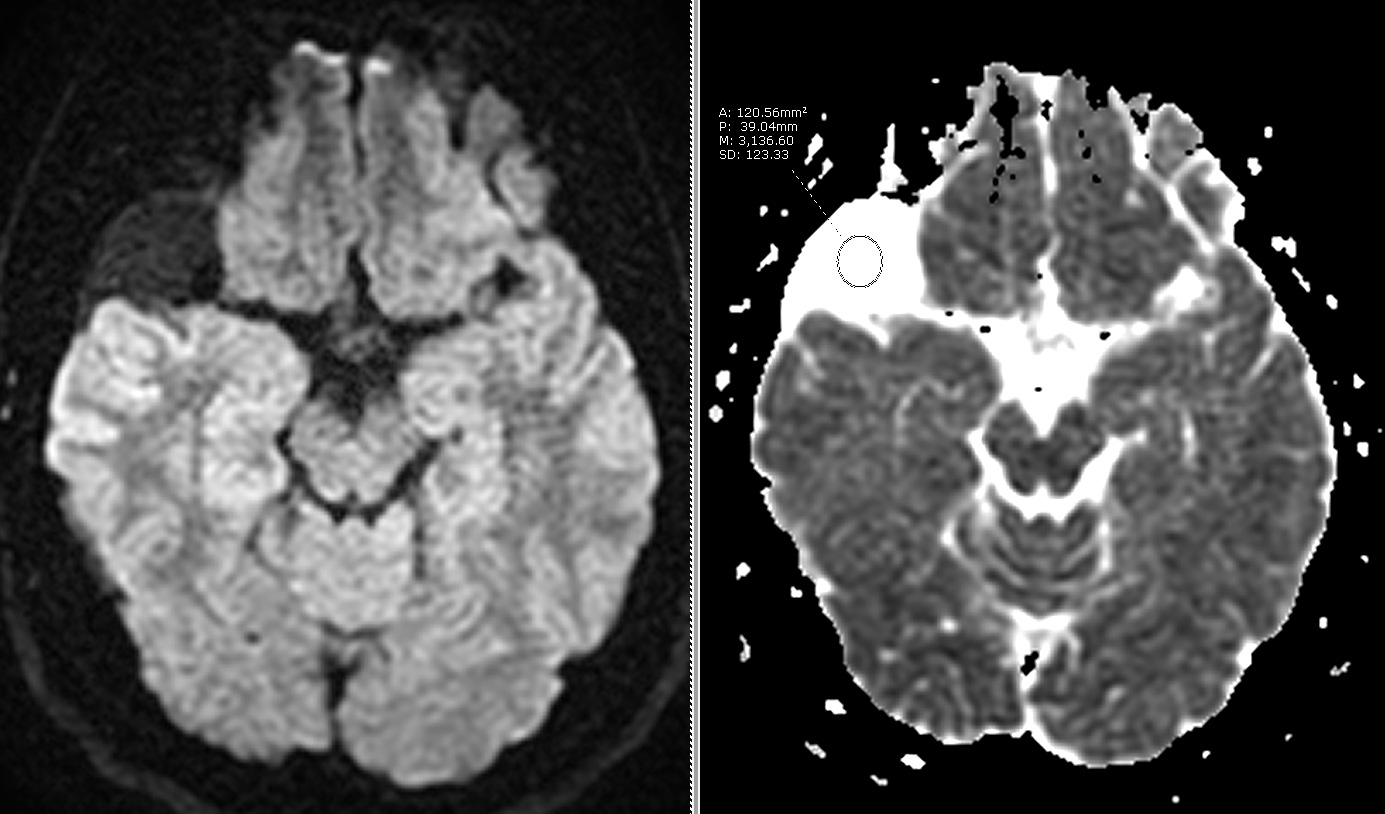 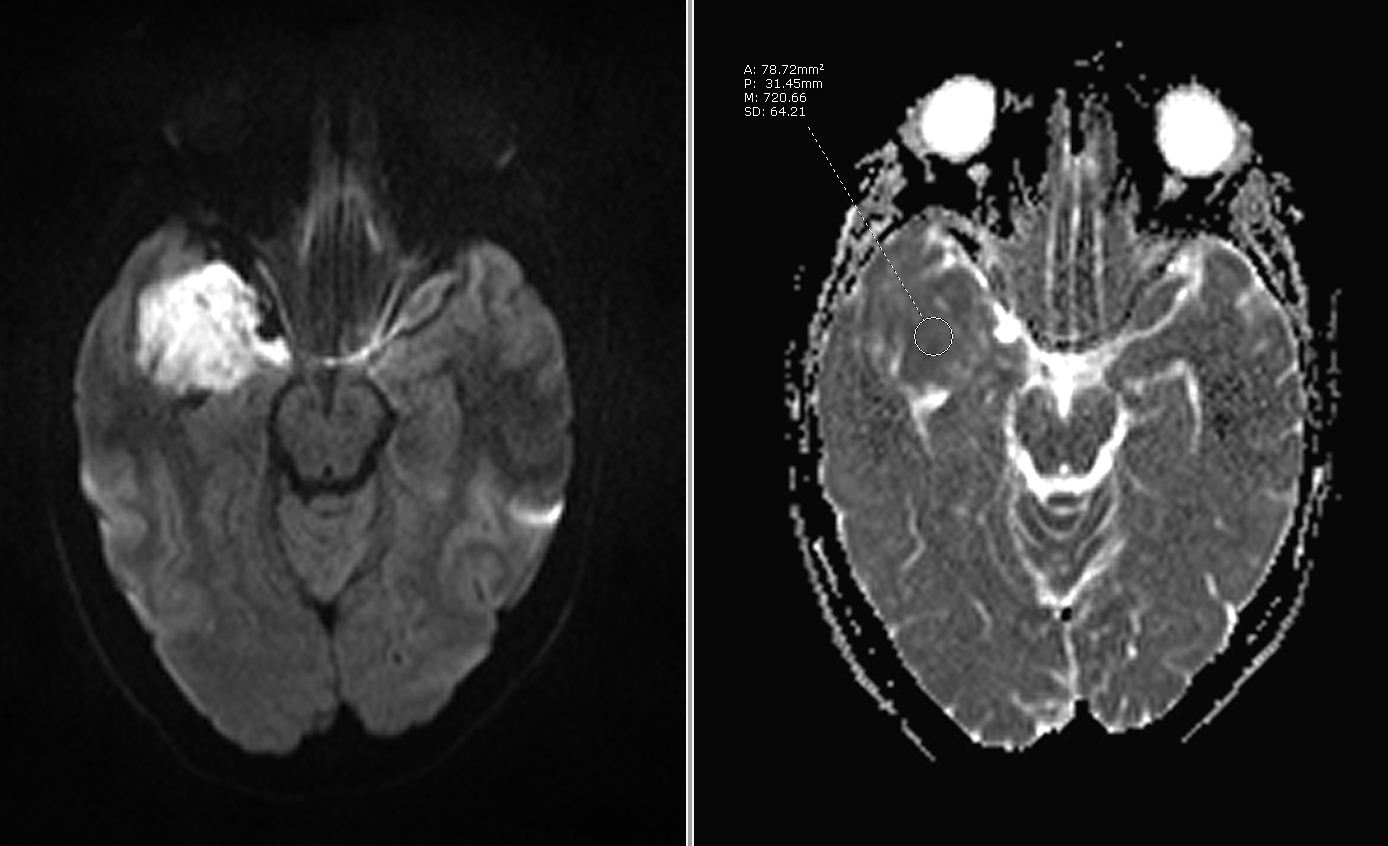 If you compare the ADC values from an epidermoid cyst of say 700 to 800 x 10-6 mm2/s, to those obtained from acute infarcts or cerebral abscesses then you will note that the ADC values in both of those situations are much much lower (more restricted). 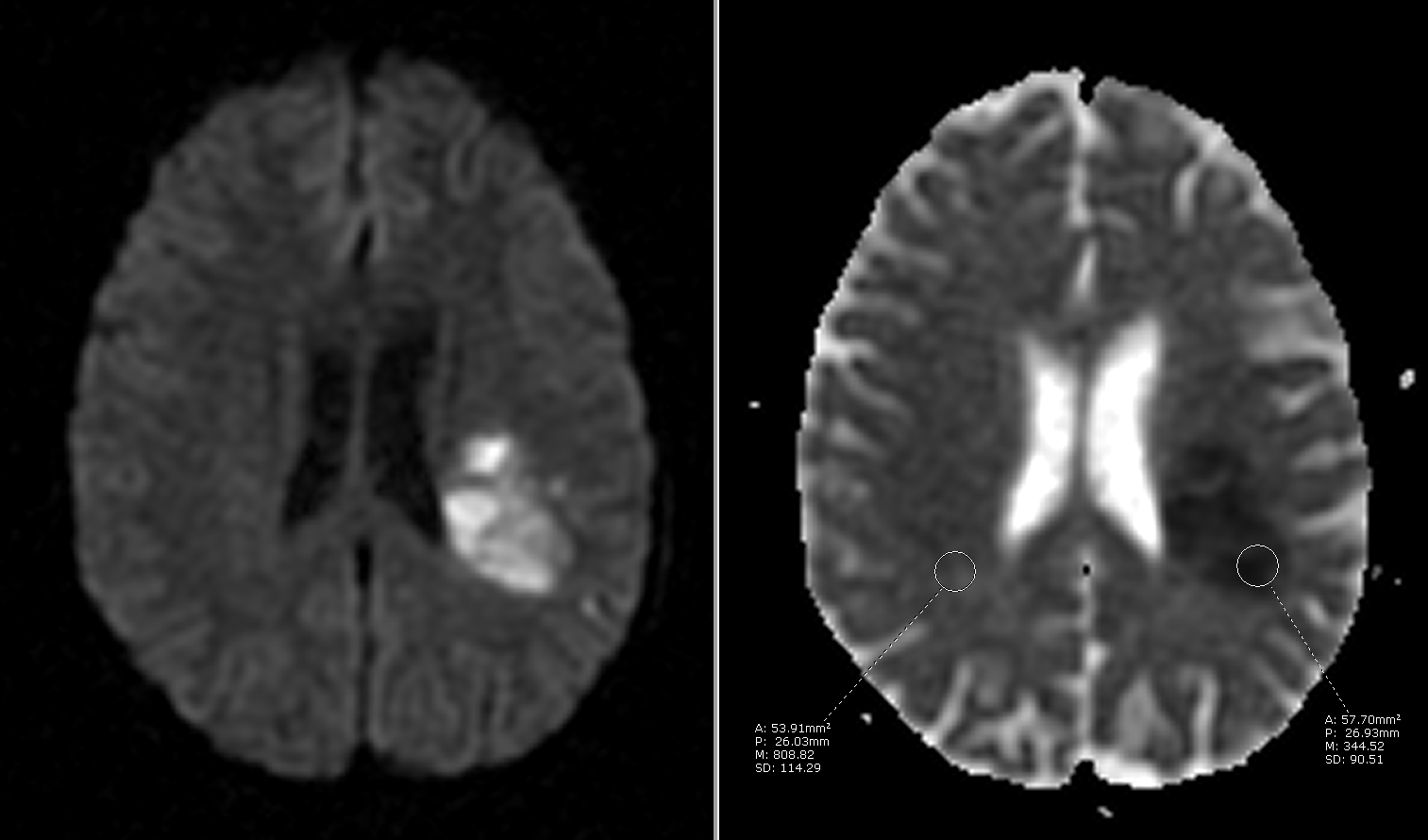 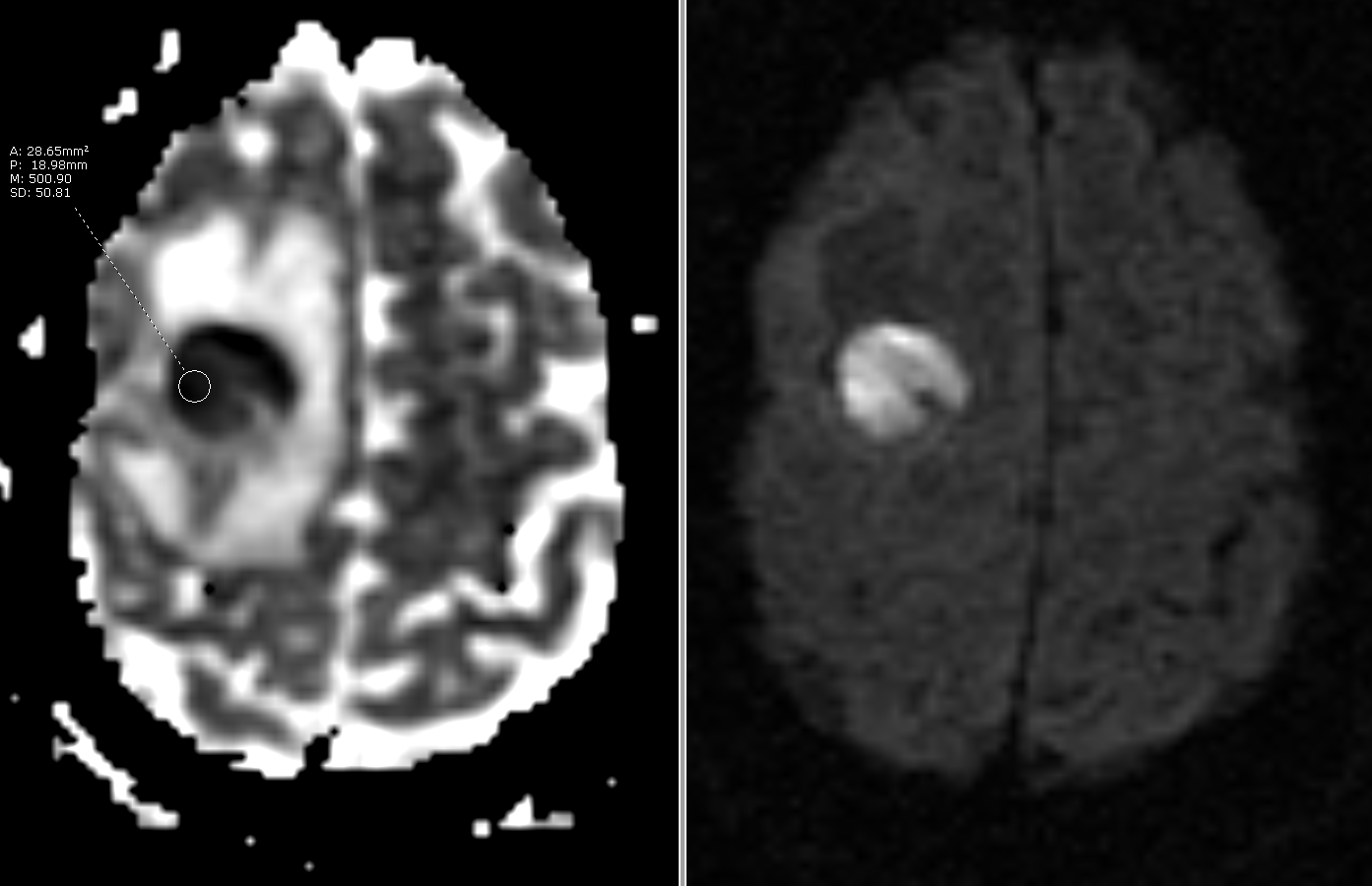 So what is the take home message? Diffusion restriction is a continuous scale ranging from approximately 3400 for CSF all the way down to 0, and to say merely "restricted diffusion is present" is as meaningless as saying in a CT report that "density is present". Get used to the values you expect to encounter and remember that invariably when you are talking about the presence of restricted diffusion it is relative to some other tissue. As you become more comfortable with these values, you will find that you start using them in many other scenarios, such as predicting grade of gliomas and assessing treatment response in high grade tumors.