OpenStax College (cnx.org) has a large number of image files/illustrations available for use under CC BY 3.0 creative commons. Many of these are excellent. In the spirit of Free Open Access Medical education, we undertook to transfer illustrations that would be useful to add to Radiopaedia and upload the images under a bespoke OpenStax College.

All the images were of course appropriately attributed (example case) and were then added to relevant articles (example article). In many instances, a square crop was performed to make the images work better in the Radiopaedia layout.

The team consisted primarily of Andrew Dixon (lead), Chamath Ariyasinghe (aka "Spangles"), Henry Knipe and Humberto Rodrigo Tibau, although many others pitched in.

Overall 30 'cases' were created, each containing numerous images. Check them all out here.

Best of all, these images can then be used to illustrate specific features in years to come.

You may have noticed that some links in Radiopaedia are grey (dead) rather than blue (active). They indicate a link to a not-yet-existing article; as soon as it is written that article turns blue and is correctly linked.

Over the last month or so we challenged our editors to write 5 new articles each hence turning many grey links blue.

At the end of this project, it's not just fifty grey-shaded links that changed color. Collectively a staggering 115 new articles were created by our editors. A special note of appreciation goes to Craig Hacking who contributed 54 new articles alone, Frank Gaillard (11), Andrew Murphy (10), and Vincent Tatco (7).

Here are just a few:

We hope to have inspired our fellow radiology-minded professionals to also contribute new articles. So next time you see a grey link and realize that article is yet to be written, feel free to fade away some grey links yourself.

Have a look at our instructions if you don't know where to start. Our community is there to help and expand whatever you start out with.

The Internet Is Going Crazy Over These 'Apple Eye' X-rays

SUNNYVALE, CA - A doctor at Stanford Medical Center may have accidentally uncovered a prototype eye implant made by Apple. Yes, think Black Mirror but in real life!

When radiology resident Dr Poakyu Indaii noticed an unusual device in the eye of a Cupertino man he x-rayed on Friday he quickly snapped a few pics with his phone. 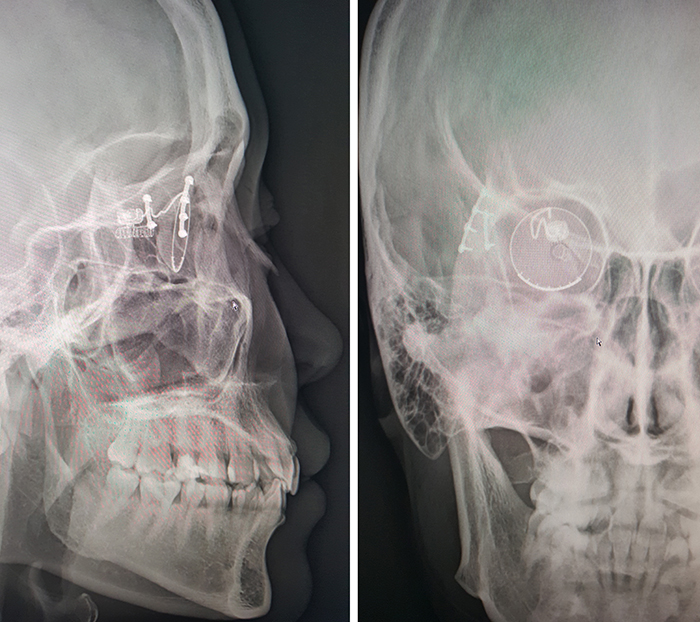 “This was clearly not due to the car accident, so I tweeted the photos to my radiology colleagues in case they'd ever seen something similar. I hadn’t noticed the Apple [logo] at all but boy the internet did!” said Dr Indaii. 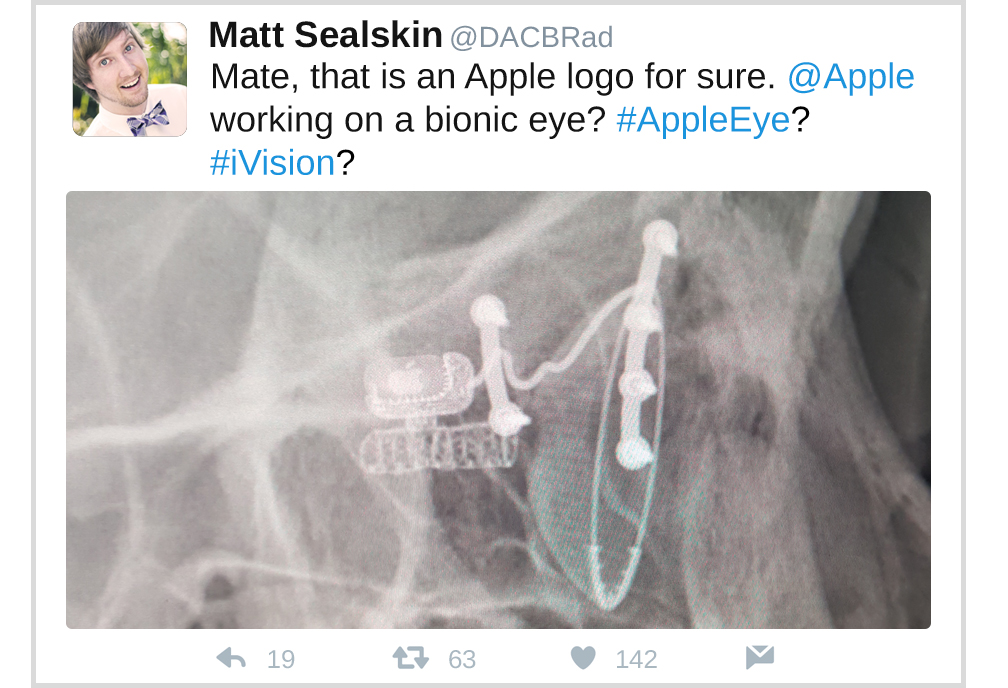 The trainee radiologist hastily deleted his tweet fearing he may have breached his employer's image sharing guidelines. But he was too late to stop the x-rays going viral. 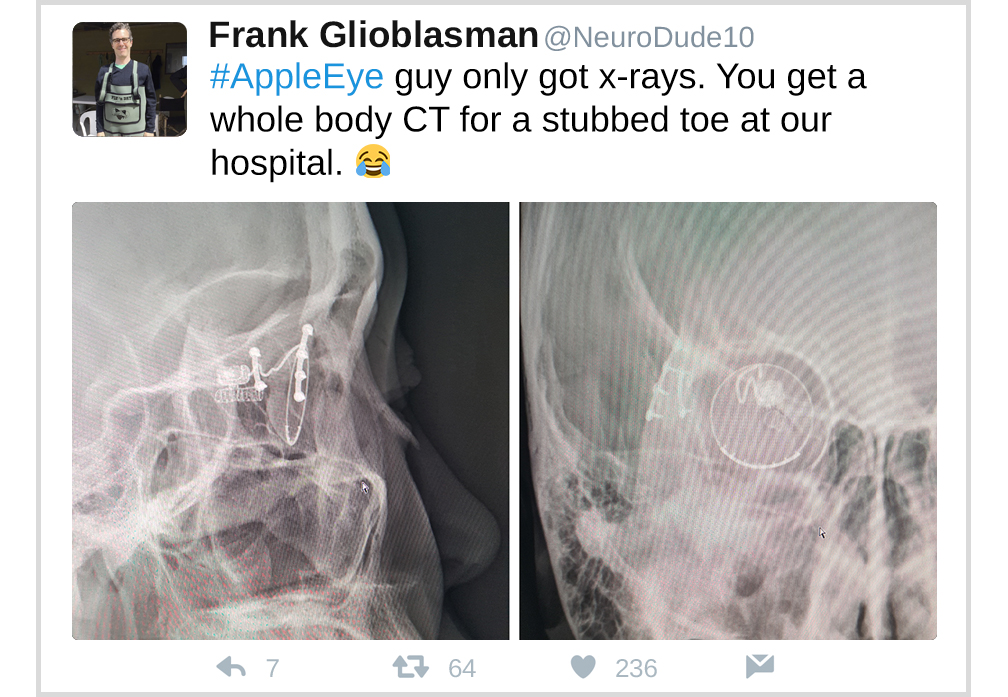 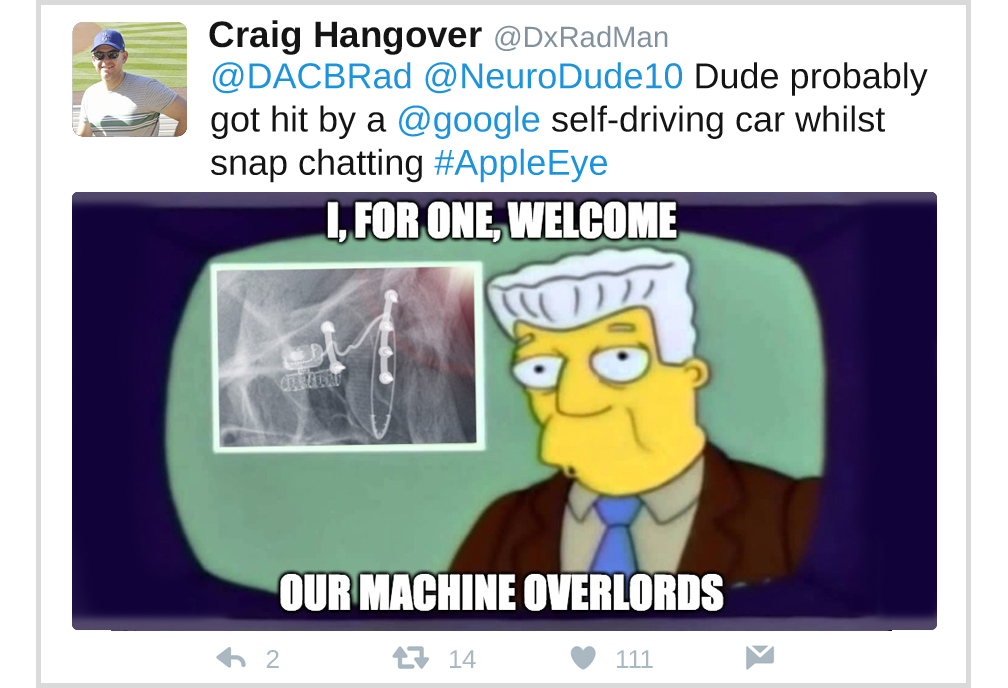 The internet was quick to make the link between the Apple device and an episode of the Netflix series Black Mirror in which people with eye implants can re-watch moments from their life on demand. 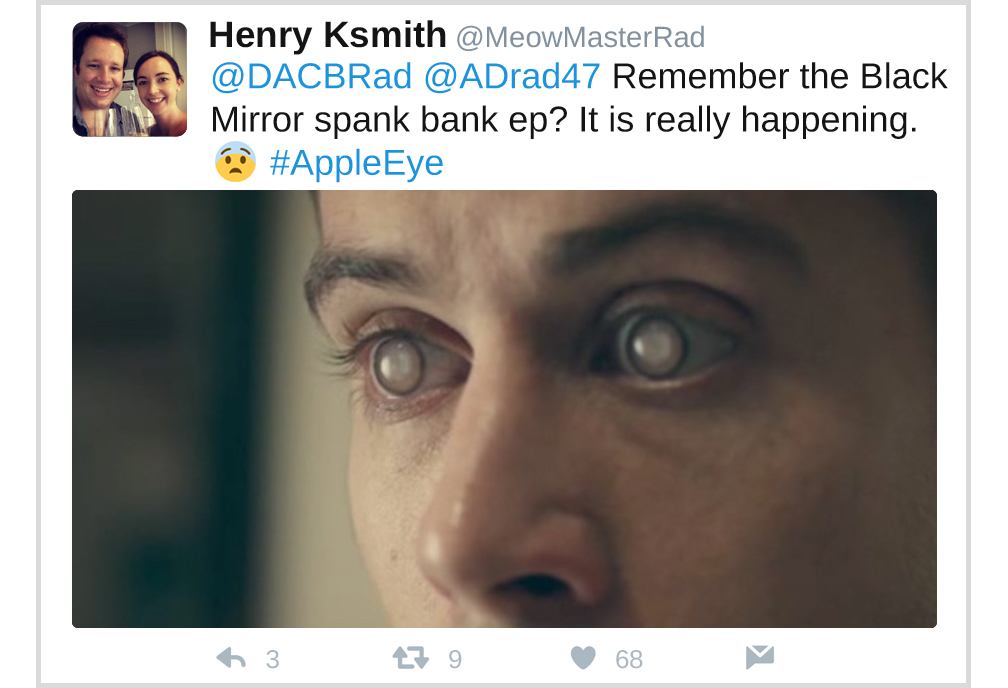 Apple, notoriously secretive about their projects, refused to comment directly on the tweets but did confirm that a member of their bio-design team had been involved in a "minor car accident".

News of the device seems all the more feasible given the recent Apple takeover of Astley Labs, a bionics firm in Lancashire. Headed by Professor Fuldja Aggen, the company's patents on bionic retinas and animal neural interfaces are considered Farnsworthian by most experts.

Even President Trump took time out of his daily golf round Friday afternoon to type a tiny-handed tweet on the issue.

Only one thing is certain - we will never be able to trust what we see again, even when the truth is just one click from being right before our eyes.

We are planning to undertake system maintenance Tuesday, 21 March 2017, between midnight and 03:00 UTC. During this time, you may be unable to log in or edit content, including uploading cases, or anything else that posts information to our website. Other features that might be affected include:

You will still be able to read articles, see cases, explore playlists, and connect on social media. If you are already logged in, you may be able to continue seeing your own cases.

If you encounter any roadblocks, our Radiology Channel is still up and running — why not kill a few minutes there before trying back here again.

We apologise for any inconvenience.

With over 10,000 articles, keeping Radiopaedia.org tidy with a consistent style requires constant work by contributors and the editorial board. To kick off 2017 we undertook a quick review of approximately a quarter of all articles to ensure that the title syntax is consistent and helpful. This also involved reviewing and updating our style guide including defining disambiguation article style.

We reviewed 2598 articles and edited over 600 of them. There are bound to be ones still out there, and new ones every day.