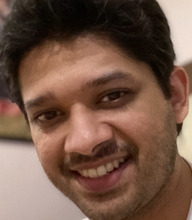 Dr. Ayush Goel is a consultant radiologist from India. He has been one of the editorial board members at Radiopaedia since 2013. He is also:

He graduated from the government medical college in Haldwani, cleared DNB common entrance test and opted for Radiodiagnosis through centralised counseling. 3 years into training, he cleared the DNB Radiodiagnosis exam (theory and practical) on his 1st attempt.